Happy thanksgiving! There is a 21-pounder in the brine now and half the guests can’t make it so I may have to open a Brooklyn outpost of Capriotti’s. If you ever find yourself hungry in Delaware, I’d suggest you memorize those locations.

So the new uniform announcement came and went in time for your holiday shopping derby, without a runway fashion show nor any of the garish alternates the Mets had asked about earlier this year. Of course they screwed up the new creamy pinstriper by including the unnecessary black dropshadows (and names on back, I’m pretty sure) and failed to throw out the black completely, though that was a little much to dream for an organization that only now has come to realize that Met fans wanted some Mets with their new stadium.

I try not to get angry anymore. I think it might be best at this point to look around at the people you’re spending Thanksgiving with and realize the Mets are run by a group not unlike them — peculiar unto itself, kind of hard to explain to outsiders, and at times, just completely, astonishingly, bewilderingly, irritatingly, embarrassingly, mind-bogglingly clueless. Spending 81 holidays a year with them would probably drive you crazy at some point too. 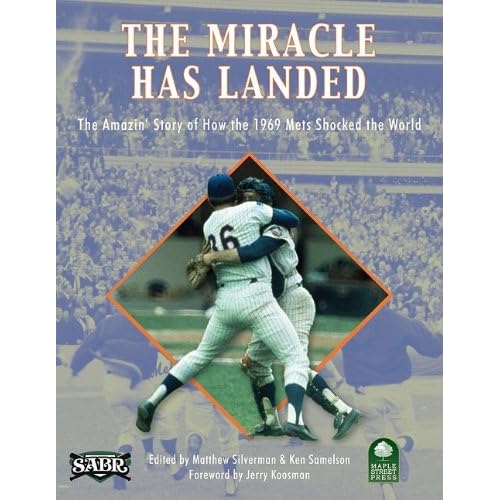 If you haven’t seen it yet, The Miracle Has Landed, an offshoot of SABR’s Biography Project focusing on the 1969 Mets, is out now from Maple Street Press. I contributed two chapters including an interview with reserve infielder Kevin Collins, who I’m happy to report was absolutely thrilled to learn that he was the first player in team history to wear four different uniform numbers. But the book’s real highlights are contributions from some terrific folks like Matt Silverman (who co-wrote my book and co-edited this project); Greg Prince; and my friend Edward Hoyt. Being associated with these guys as friends and collaborators is something I have to be thankful for in what was otherwise a rough year to be a Met supporter. Thanks also to all the regular contributors to the chatter at this site including Alex. And to my web guy David Moore, with whom I hope to complete another site overhaul this offseason.

We have more new coaches! Say hello to new third base guy Chip Hale (No. 5 with the Diamondbacks last season) and bench coach Dave Jauss (No. 50 with the Orioles last year). We’ll update that info as it comes in.