Looking Back, Looking Ahead

My friend Greg Spira passed away last week, the end result of a long and recurring battle with kidney disease. Greg was 44 years old, a Mets fan who grew up in Whitestone, Queens, and an editor who among other accomplishments was kind enough to solicit and encourage my contributions to the Maple Street Mets Annual over the past few years. I knew Greg only for a short time, and were he anyone else, he’d probably be one of those quasi-business acquaintences with whom you interact with from time to time but never get to know well. But Greg’s extraordinary intellect, curiousity and friendliness won me over. He was genuinely interested in so many things, a simple phone call to relay a message over a particular point in an article would inevitably become a hour-long phone conversation over a hundred more topics, and an assignment that could easily be relayed with an email would instead become a long lunch, or minitaure golf outing, or a Mets game. I liked Greg a lot. Our mutual friend Matthew Silverman knew Greg very well, and wrote a terrific rememberance of him at his website.

What a trial 2011 was for us Mets fans. In May, author Dana Brand died suddenly at age 56. Dana was in the process of organizing a scholarly conference all about the Mets to mark the occasion of the team’s 50th anniversary. How awesome was that? The great news is that event will happen in Dana’s honor April 26-28 at Hofstra University, and is open for presentation submissions through Jan. 10.

By the time Dana passed, my sister Jennifer was in the final weeks of her life. As I mentioned here before, but haven’t written about much lately, Jen had ALS, or Lou Gehrig’s Disease: a progressive neurological disorder that despite our efforts remains undefeated. Jen’s loss at age 46 deprived her husband a great wife, her three kids of a great mother, my family of a great sister, aunt and daughter, and the Mets of another great fan. Jen was among MBTN’s biggest supporters and totally got the concept. She made sure each of her friends bought one of my books whether they wanted one or not, and she had a lot of friends. It’s impossible to say how much I miss her.

They say a year like 2011 is the kind of thing that puts Mike Pelfrey’s struggles into perspective, and I suppose it does, though the overriding vibe is an urge to see better days ahead. I’d like to think that all three of Greg, Jen and Dana would see this coming season not exclusively as a disaster in the making, but would appreciate it also for whatever it brings, for its particular moment in time. We only have so many of them.

Super job by Dillon Gee and beleaguered manager Terry Collins on Sunday to stop an ugly losing streak. Seems like last weekend’s surprise series loss to Washington was so demoralizing it seemed combat against a superior opponent in the Rockies offered no choice but to succumb, hard at first, then increasingly easily. At some point it became less about admiring the Mets for hanging in there, and started to resemble something like a bare-knuckle beating. By the time they got to Atlanta of course Wright was in the throes of a patented three-whiffs-a-night slump. Things had to get worse before they had a chance to get better.

I’m on my way out of town, so you’ll have to enjoy this week’s action without any updates but I hope you can join me in support for a battle against Lou Gehrig’s Disease, which unfortunately has affected my sister Jen (that’s Jen above with her husband Chris and her three kids at Shea). ALS is a progressive nuerological disorder resulting in paralysis and eventually fatality. There is no known cause and no known cure. The Packard Center at Johns Hopkins University in Baltimore, where Jen is getting treatment, is the country’s leading ALS research center and is supported entirely by contributions. There is no money in fighting rare disease!

The Fiesta 5K race in Baltimore May 7 is the Packard Center’s largest annual fundraising event. Some great old friends of Jen’s and myself — many comprising the Harborfields High cross country team half a lifetime ago — are getting together to run the race that day and would like your support. Here is my fundraising page — click “Support Jon” to make a contribution: Every little bit helps but let me know here if you’ve made a contribution and I’ll get you a copy of the Mets by the Numbers book. What a deal! Thanks!

Step Right Up and Meet the Jens 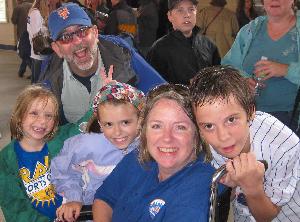 More than 70 years after the condition inspired Lou Gehrig’s “Luckiest Man” speech, Amyotrophic Lateral Sclerosis (ALS) has no known cause and no known cure. As some of you may know, my sister Jennifer has been bravely battling ALS, or Lou Gehrig’s Disease, now for a few years. Jen is less than two years older than me, and a big Mets fan herself. She has three young kids, and they’re Met fans. In recent months, Jen’s been keeping a remarkable and eye-opening journal of how this condition has affected her life.

The Walk to Defeat ALS, being held May 15 at Hudson River Park in New York, helps to support research and care for those affected by ALS, and spreads awareness of the urgency to find treatments and a cure. To support Jen and others affected by ALS, my brother Chris and I started a team, Meet the Jens, to participate in the event.

Please consider walking with our team, and/or sponsoring me, at the event this year. We have already raised more than $7,500 but with your help we can do much more. You can sign up to sponsor me and learn more about the walk, at this address (just click “donate to Jon” to make a contribution). While any donation would be deeply appreciated, as an added thank-you, I have a limited number of copies of the Mets by the Numbers book, which I’d be happy to personalize and send free to any donor contributing $30 or more to this great charity. Just let me know! Meantime, I hope to see you at the walk this year. Thanks!

This weekend, all Major League Baseball teams will commemorate the 70th anniversary of Lou Gehrig’s “Luckiest Man” speech and raise awareness and funds for the disease that took his life and would come to bear his name, amyotrophic lateral sclerosis (ALS) or Lou Gehrig’s Disease. Seventy years later, ALS still has no known cause and no known cure. My sister Jennifer was diagnosed with ALS last year.

On tomorrow, July 4, each home team in Major League Baseball will host an on-field reading of Gehrig’s farewell speech during the 7th Inning Stretch. The below clip — the only surviving video of the moment — is only a portion of the talk he gave. In addition, all players will wear a “4-ALS” patch. Local chapters of the ALS Association are sponsoring programs to donate based on the number of hits your favorite team amasses on July 4, but support for care for patients and research on the disease are needed at all times, and I hope you can join me in making a contribution.

On a related note, I only recently read Jonathan Eig’s terrific biography of Gehrig, LUCKIEST MAN, and suggest you should too. Neither mauldlin nor worshipful, it paints Gehrig’s nievete and dorkiness as sharply as it illustrates his extraordinary strength and his value as a teammate.